By Aleia Robinson-Ada and Samah Ali

Over the next few months, we will be featuring the projects from our Behind the Dust Visual Series Mediamakers. Young Migrants by Aleia Robinson-Ada and Samah Ali is the third in the series.

In July 2017, an old friend, Samah Ali reached out to me about a creative idea she’d been playing around with, which she envisioned as a documentary photography project. Samah’s idea was to investigate the lives of diasporic people in Toronto who have established roots in Canada due to their family’s migration or they have their own arrival story to this country. All she needed from there was someone to help her execute the photography aspect of the project… and about 100 cups of chai later, our baby was born.

In early January, Samah and I sent out a call through our social media platforms asking for participants to volunteer and be a part of our journey in documenting and getting to know first- and second-generation immigrants in Toronto. The response was incredible. Emails flooded into our inboxes. So many people were interested and wanted to be a part of a project where they could share their stories of immigration with us! 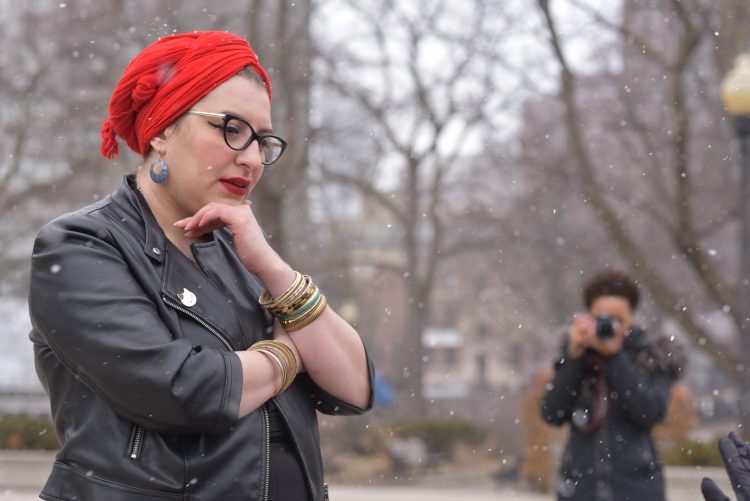 The Young Migrants Project is a series of images that includes first- and second-generation people between the ages of 15 – 32 years old who live in the Greater Toronto Area. Our aim was to capture individuals of international migration and the stories of people affected by immigration. With each participant, we shot environmental portraits in a location that they felt describes a piece of their history or families’ history. This location would be of sentimental value or bring up a specific memory of their migration story. The places chosen ranged from a first apartment, a first job,to a local restaurant, to a city park where their family gathered and more. Along with the location, we shot each participant with a tangible item they own that symbolizes back home as well as the change and transition of migration. Our participants chose items that ranged from family photo albums, to a pair of shoes, to a briefcase, to a household item, or even a soup spoon made from a boat’s engine.

With each participant, we also conducted a short audio recorded interview. In their interviews, participants spoke  about their stories of migration and how they ended up in the city of Toronto and why they have ultimately stayed. The audio is meant to give the audience greater context surrounding the location and item each individual chose and its meaning to them. We noticed how the stories are strangely similar and relatable no matter where in the world each participant migrated from.

This prompted us to ask: even though we all look different, are we?

Through this project, we had the opportunity to meet so many beautiful faces and get to know their intimate stories and family histories. We had the chance to capture the varying angles of the diaspora from countries like Vietnam, Jamaica, St. Vincent and the Grenadines, Ukraine, India, Nigeria, Lebanon, Kenya and many more! This is a testament to Toronto’s true diversity. It was an honour and we thank everyone who shared — for without them there would be no Young Migrants.

Sisterhood Media is a media production company and streaming platform made for and by people on the margins. Our platform aims to start discussions on identity, community, and self-actualization through audio and visual stories, whether made in-house or by incredible filmmakers working towards a shared vision. We’re going live this month, be the first to know.

Aleia Robinson Photography is led by Photographer, Visual Story Teller, Journalist, Media Maker and Soul Sister – Aleia Robinson-Ada. Aleia founded and created her company in the later half of her university career and has now stemmed into an artist traveling around the world inspired by people, their stories, and their spaces. Aleia has produced works of art such as Untitled: Portraits of Black Women, The Celebration Series and Micro/Macro Aggressions Against WOC, that document women of colour and create discourse within the community in their space and their words.