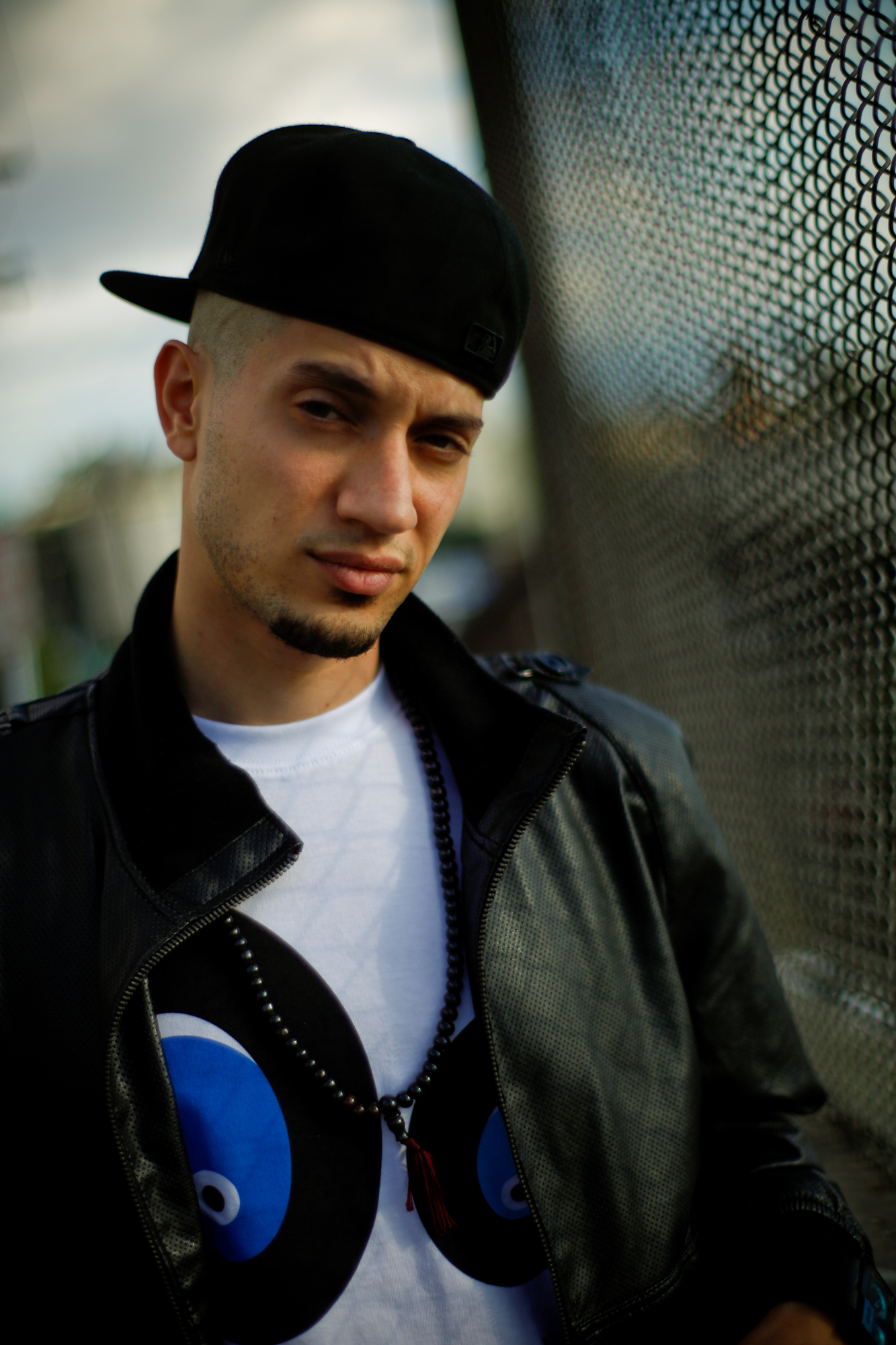 “Look up in the sky, it’s a bird, it’s a plane, it’s an Arab superhero and he came to bring change”. This is a line from the track “Superhero” on Omar Offendum’s (born Chakaki) debut album “SyrianamericanA”. With a moniker like Offendum you’d think that he’s out to do just that (Offend ‘em, that is). But Offendum, uses hip hop to create a level playing field, to unapologetically reclaim a voice in a post -9/11 era where he’s grown up Arab, Muslim and American. “SyrianamericanA” is about “bridging those identities, those worlds, ” he claims, inadvertently defining his mission. Except he’s actually rather polite about it. His superpowers don’t shy away from political commentary and sharp lyrical artistry, it’s just that he’d prefer to show the art as part of a broader movement rather than emphasizing hip hop Arab-guy angst, per se. And like most superheroes, his daytime identity as an Architect is distinct from what he claims to be his “moonlighting in the hip hop world,” although both professions share the idea of shaping ideas into form.

Meanwhile, “SyrianamericanA” comfortably swings between English and Arabic, oozing with passages reflecting Offendum’s own embrace of Arab identity, politics, unity, the best of the Middle East, as well as personal realms like love and loss. Back in September, I called Offendum to try and gain some semblance from a heated summer ripe with vilified view of Arabs, Muslims and immigrants more generally, and to see whether he could present as this alleged “superhero” to transcend the divide – artistically at least. Having grown up Arab in America, being schooled in a Muslim school where Arabic lessons went alongside history and civics classes, Offendum’s reaches in the musical realm are undoubtedly reflective of his upbringing and identity.

Discovering hip hop during his college years, against the backdrop of September 11th and the ensuing ramifications for Arab and Muslims in America and abroad, he was ready to absorb it as a “platform for marginalized voices” and formed a group called the N.O.M.A.D.S (which stands for Notoriously Offensive Male Arabs Discussing Sh*t) alongside other racialized MCs such as Mr. Tibbz. In doing so, it emerged as the ideal tool for these young men to voice their own concerns, and bridge the divide waged by the wars in the Middle East and the climate of targeted fear on home waters.

As the conversation flows, I pick up on the ease with which he’s able to translate for diverse audiences, adapting into different

capes and coats. The brand of hip hop in which Offendum participates, he describes Arabic as a “big part of the lexicon”. A constant ebb and flow from continent to continent, language to language, yet still keeping the message at heart. Literally, he’s taken the words of Arab poets like Nizar Qabbani and translated them for a more universal audience. And he’s done so with thoughtfulness and finesse – not a simple feat given the complex structure of the Arabic language. On another path, he brings out rhymes about growing up in Washington DC as easily as he chimes about the delights of Damascus. When I ask him about his inclination to “Arabize” his rhymes, he clarifies that “it’s not uncommon to include an Arab word here or there” and to use that to “identify with both Arab youth and the reality of his own experience in the US,” as well as stay connected to his “Middle Eastern heritage and reach out to the audiences from that part of the world”. This is an element featuring prominently in his tracks, appealing equally to audiences in both the East and the West.

Language may be one of the commonalities tying him to his peers who are participating more broadly in the movement as Arab artists – though their distresses might differ. An artist living in and rapping from Syria may speak in more distinct tones than Offendum, despite sharing a common heritage. Years of political censorship and a broader sense of youth disenchantment in Syria translate into a different message, although Offendum is no less aware of this. His themes traverse many regions, just as his sounds do. “Thematic translation of the culture is important”, he tells me, especially since “audiences in the Middle East tend to vary significantly socioeconomically”. For him, Arabic seems to be a natural form in which to rhyme, given it’s prominence as a “backbone of Arabic culture” and a poetic, ancient, oral tradition. For now, his audiences recognize him as an Arab spokesperson, using his art to highlight the positive elements of Middle Eastern artistry. But eventually, “the aim is to move out of the comfort zone and speak more broadly,” he adds. As such, although Arab and Muslim identity are prominent in Offendum’s work, he’s reluctant to be labeled as a “special interest” musician. Offendum attests he’s more interested in participating in the hip hop – albeit the underground, independent side, more broadly rather than being labeled exclusively as an Arab or Muslim rapper.

Many of Offendum’s rap collaborations seem to sprout from a familial tradition – it’s not uncommon for different musicians to refer to each other as “brother” – another testament to their Arab roots where family is foremost. He names a handful of his own “brothers” that influence his work, easily sharing, mixing, bouncing ideas of each other. Within this circle are prominent Arab MCs such as The Narcicyst and others with a transnational hip hop appeal. When I ask him whether this figures as a form of “pan-Arab unity” in the hip-hop world, he muses that it’s certainly an element and helps many MCs “reclaim that identity” through “something new they can latch on and not worry about the baggage that a lot of that stuff can entail.” At the same time, he points to the need to relate it to a broader diasporic community, something he promotes through the idea of SyrianamericanA – “a nation-state without borders”, and presumably, without much of that baggage he warns of. And so with this idea he takes on another notion of what it means to be from two worlds. I ask him whether he’s afraid some of this message might get blurred, lost amongst this lingual change. In response, he reminds me of the eminence of hip hop as one of the most important popular culture exports outside of the US – eloquently situating it as a “chameleon that can shape its way for different cultures.” So while it’s not the only form of music coming out of the Middle East and Arab diasporas, especially in relation to angst and urban expression, in many ways, it’s the most natural.

And metropolises like Beirut – a place Omar has performed in and returned to numerous times – present a microcosmic cataclysm of arts and culture on the one hand and complex political situations on the other. Moreover, they are a ripe place for Do-It-Yourself Hip Hop Studios and ultra-responsive to a transnational hip hop movement. A noted development by Omar – “to look back at the last 10 years and the caliber of the work that’s coming up. Every time I go to the Middle East some new artist is ready to show me his track”, he mentions. This sharing bridges some of the distance in the themes explored by artists in and outside of the diaspora. Omar credits much of his album to beats produced by young, aspiring MCs eager to share their technological talents from places as dispersed as Tunisia to Michigan – pan-Arab unity in rhythms. Hip hop the great export, traversing worlds, languages and rhymes and branding a new Eastern identity – seems like the superhero’s work is only just beginning.