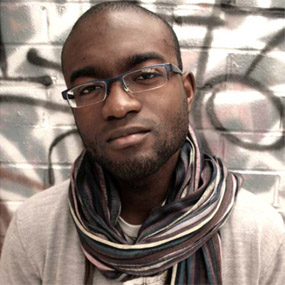 Inua Ellams is a poet, playwright, performer and graphic designer. Or rather, a wordsworth, peruser and interloper traversing different worlds with rhythm and slice. His writing and performance comes with ornate detail and structure that straddles his Nigerian roots and British upbringing. Layered in richness and full of iconographic imagery – he presents British audiences with a hologram of an immigrant’s creative coming of age.
Inua’s critically acclaimed first solo play, “The 14th Tale”, described as a piece that is punctuated by “beautiful poetry, while challenging the audience’s expectations of what it is to be a young, black male in London today,” won at the Edinburgh Fringe Festival and showed at The National Theatre in London. His follow-up, conspicuously titled “Untitled”, bravely moves into the next realm. It continues as a more formal encounter of his British upbringing and Nigerian roots combining magical realism, and personal narrative. It’s rife with the rich poetry and intricate language Inua’s spoken-word style is known for.
He speaks with This is Worldtown about embracing his writing and background to eventually spew words as epically detailed as his hyper-observant conscience. Influenced by nature, classical poets, and by virtue of being “a child of the hip hop generation”, Inua’s personality and poetry channel a vivid picture of a modern immigrant’s tale. This is…Inua Ellams.

TIWT: What inspires you to write a story or poem?
IE: It usually starts with philosophical questions or dares or mixtures of both. The 14th Tale was written with a philosophical standpoint and a belief there was a vague order to things, and that regardless of how mad or chaotic something might seem there is structure inherent, chaos is order and vice versa [which is] one of the things that I believe in that influenced The 14th Tale. And how it’s written and the structure of it.
I’m influenced by philosophy and belief that there isn’t an idea of the “other”, it’s a construct – I just hate that, I just hate that. That influences me a lot. I firmly believe that I could speak to a Mongolian herdsman and once we get past the language barrier we could find things that we find in common with each other. So the idea of an “other” – something I try to dispel in everything I write. Also, I’m a hopeless romantic so that influences me a lot. I like tying things together. Bows. When I begin to write poems sometimes I start with two completely different things and try and make them meet in the middle – maybe related to something I experienced as a kid. That influences me a lot. I’m influenced by classical literature. People like John Keats, William Shakespeare. Wordsworth, Elliot. I just love the classic cats for doing what they do and giving ground to what we do. On the flipside of that, I’m influenced by the hip hop generation- I’m a child of the hip-hop nation and bragadocia – by the desperateness of it all. For me, both things exist on the same plate. In the same way that classic poets talked about holding the midnight candle while sitting there and writing in the darkness, I think Hip Hop artists echo that same image, poeticness. Nothing more poetic than a rapper working in the middle of the night, strutting with nothing to show for it, except his words and writing by street light. Both images contract and meet for me. Both these things sit and meet for me. There’s a saying I like:
Old’s cool = oldschool. Try to mix the old with the new society and odds with eachother and tie ‘em together.