Warning: Parameter 2 to wp_hide_post_Public::query_posts_join() expected to be a reference, value given in /home/customer/www/thisisworldtown.com/public_html/wp-includes/class-wp-hook.php on line 307
 Talking Walls of Lahore - this is worldtown 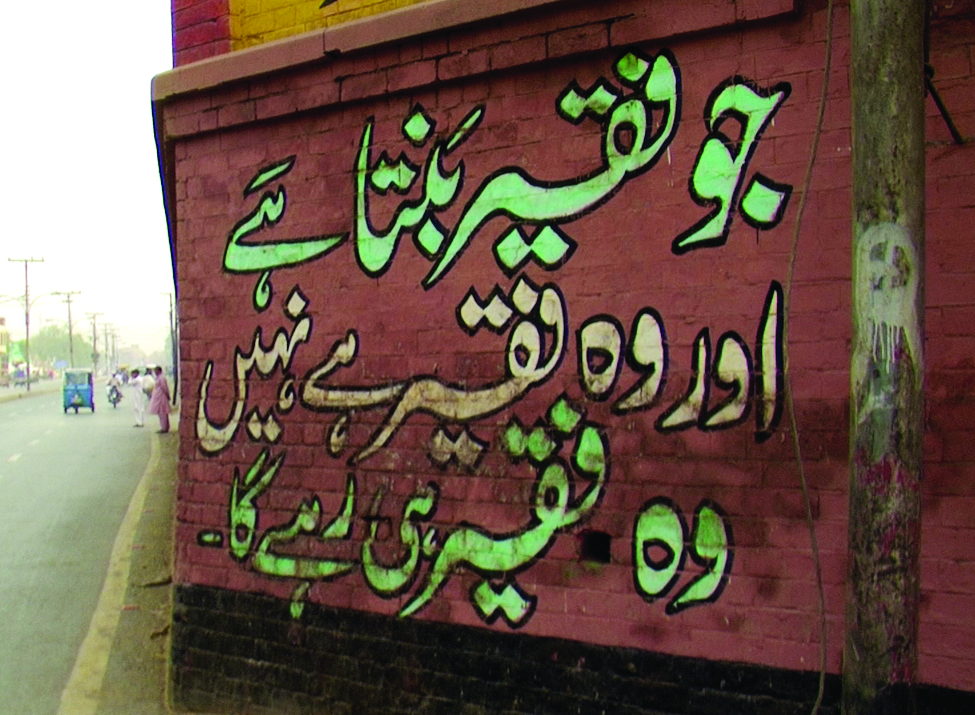 This is Worldtown speaks to the director/producer of a short documentary on the art of ‘Wall Chalking’ in Lahore, Pakistan. As a means of expression, the chosen sites and the messages conveyed through wall chalking become a lens into the many layers of Pakistani society. A short description on the film, and the interview transcript with director Numra Siddiqui after the jump.

The Talking Walls of Lahore is a short documentary about graffiti in Pakistan’s cultural heartland. Words consume the city’s every last visible space: from herbal practitioners advertising impotency cures to political and religious slogans. In a country battling economic & political instability, facing an uncertain future, these ‘wall chalkings’ form a rich amalgamation of contradictory messages. The Talking Walls of Lahore journeys through an ancient city, exploring the complexities of how words are used and absorbed in a multitude of dimensions. It tells the story of how people can come to author and lay claim to their own city. The act of writing becomes emancipatory, defying forces that attempt to bind individual expression.

This is Worldtown (TIWT): You explore the role of graffiti or “wall chalking” as a traditional form of expression in Lahore, how did you decide on this as the focus of your documentary?

Numra Siddiqui (NS): I had always wanted to make a film about taking a visual journey through Lahore. Initially, I was drawn to the posters of martyred police officers put up after terrorist attacks. However, these government initiatives seemed too contrived and since a number of them were in English, the audience seemed to extend beyond a national audience. I realised that the surrounding graffiti said much more about what Lahoris were trying to say. Wall Chalking, as it is known in Pakistan, took many forms: artistic murals, religious phrases, illegal advertising and even romantic messages. It seems to go unnoticed and most of it is regarded as vandalism – I thought it was important to shed a new light on these writings and highlight the visual conversation amongst the inhabitants on the walls of their city.

TIWT: How did you gain access to these artists, the wall chalkers?

NS: The Gulberg murals and Ali Shehzad’s work were available online and they were the easiest to contact. My production coordinator, Waqar Gilani, who is a journalist for The News International was vital in sourcing the other artists. True to the nature of his work, we found Ifitkhar Ahmed’s contact details advertised through wall chalking. He was quite appreciative of my efforts and was eager to speak on the subject. The other two artists took a bit more time; we asked around the local area about Mumtaz Butt while we contacted the Muslim Youth Organisation regarding Mulk Shani – both men were resistant to the idea of being filmed at first and needed some convincing. I feel this is mainly due to the political implications of their wall chalking, however, they too realised that my intentions were not to portray anyone negatively and simply to discuss why they use the walls as a tool for communication.

TIWT: Did you face any barriers or challenges to making this film as a Pakistani expat in Lahore?

NS: I did not face any external barriers while filming. Any barriers or challenges I faced as an expat were purely internal; having lived in Lahore during my teenage years I had very nostalgic imaginings of the city. On the first few days of filming I found myself trying to adhere to them and while I think traces of this nostalgia are still there, over all, they were abandoned. I found it unnerving to appreciate my place of looking in from the outside – it was hard to accept that I had become a bit of a stranger and that the city of my youth no longer exists, or perhaps never did. Nonetheless, the journey through the city, discovering it all over again (and at places, for the first time) was also very exciting.

TIWT: Did you see any parallels you see between the urban graffiti movement as it’s understood in the West, usually as a part of Hip-Hop culture, and wallchalking in Pakistan?

NS: I recently came across graffiti from 1449 by a French soldier, his name and regiment scratched into the marble, in a church in Rome. It was pretty interesting to find this and it reaffirmed a global trend: the timeless effort to assert control and defy power structures. The MYO lays claim to parts of the city in branding the walls with its name and is reminiscent of Cornbread’s ‘tags’ – he was one of the earliest graffiti artists emerging from Philadelphia. The same can be said about the artist’s ‘bombing’ New York subway trains in the 1980s and the murals on the Gaza wall today. It is important to understand graffiti beyond Hip-Hop culture – it seems to be the medium used by many groups who attempt to resist forces of authority.

TIWT: What are your own observations about the arts and artistic expression in Pakistan? Are more young people engaging and what are their messages and mediums?

NS: It seems to have become increasingly dangerous to tell the truth in Pakistan. I think honesty is a fundamental component of artistic expression and so the likes of Rashid Rana and Asim Butt are few and far between. The messages are always different but I like trying to identify what the artist was really trying to say – Pakistani artists are more socially politically and socially aware and it shows in their work. Taking the form of graffiti, music and so on, I think art has become more accessible to young people – as the parameters of what defines an artist expand, the numbers increase and more people seem to be paying attention as well.

TIWT: What were some of the most surprising/ interesting Wall chalking messages you observed?

NS: I really enjoyed coming across phone numbers scribbled on walls in Pakistan. They are everywhere! It is an interesting commentary on the desperation for companionship amongst young people. This refers back to an earlier question: I did try and call a couple of numbers to interview them for the film but as I expected this was not the sort of response some of the young men were expecting from a woman calling!

I think Mumtaz Butt’s calligraphy on fakirs is very poignant. Placed a long the busiest roads of the city I think about the number of people who read those words – I wonder what they must think.

Also, I am a big fan of Asim Butt’s work and finding the ‘Bad Idea’ bench was such a treat! I looked behind every bench in the park and I was near giving up when I finally found it. Looking at the stencil words foregrounding Minar-e-Pakistan was pretty hard hitting.