It’s that time of the year! The 43rd Toronto International Film Festival (September 6 to 16) begins this week and 122 of the films selected are directed or co-directed by women, accounting for 36% of this year’s titles.

And in an attempt to shift the gender status quo, TIFF has made a five-year commitment — Share Her Journey — to increase participation, skills, and opportunities for women behind and in front of the camera. Stand up for change with TIFF, ReFrame, TIME’S UP, and #AfterMeToo on the morning of Saturday, September 8 at the Share Her Journey Rally. All who want to see and be part of real change in the film industry are invited to join the crowd on John Street at 10am.

Check out This is Worldtown’s picks of films directed or co-directed by Black, Indigenous and Women of Colour who are making their narrative feature debuts at this year’s #TIFF18.

Lou and her best friend Chantal plan to get out of their isolated, run-down town and move to a city far, far away. When Chantal’s unstable and possessive ex violates her during a night of partying, the girls decide to exact their revenge on him through a night of vandalism and debauchery. The consequences of their actions are devastating, threatening the girls’ chances of ever leaving. The more Lou fights tooth-and-nail to save her friendship and hold onto her dreams, the more she spins out of control as she begins to realize that freedom will come at a high cost.

In 19th century rural Vietnam, 14-year-old May becomes the third wife of wealthy landowner Hung. Soon she learns that she can only gain status by asserting herself as a woman who can give birth to a male child. May’s hope to change her status turns into a real and tantalizing possibility when she falls pregnant. Faced with forbidden love and its devastating consequences, May finally comes to an understanding of the brutal truth: the options available to her are few and far between.

Set in Southeast Nigeria, Lionheart tells the story of Adaeze Obiagu, a young woman who becomes saddled with the responsibility of running her ailing father’s business under the suffocating supervision of an intensely crude and eccentric uncle. Her competing business instincts and family obligations become a catalyst for a drastic change not everyone is ready to embrace.

The origins of the Colombian drug trade is explored through eyes of an indigenous Wayuu family that becomes involved in the booming business of selling marijuana to American youth in the 1970s. When greed, passion and honor collide, a fratricidal war breaks out and puts their lives, culture and ancestral traditions at stake.

THE DAY I LOST MY SHADOW (Dir. Soudade Kaadan)

Syria, 2012. During the coldest winter the country has witnessed, all Sana dreams of is cooking gas to prepare a meal for her son. She takes a day off from her job to search for a gas cylinder and suddenly finds herself stuck in the besieged area. It is then that she discovers that people lose their shadows during the war.

Studying in Hong Kong but living in Shenzhen (the port of Mainland China), Peipei has spent 16 years of her life travelling between these two cities. To realize the dream of seeing snow in Japan with her best friend, Peipei joins a smuggling gang and uses her student identity to smuggle iPhones.

Eve, a young chambermaid at a luxurious Mexico City hotel, confronts the monotony of long workdays with quiet examinations of forgotten belongings and budding friendships that nourish her newfound and determined dream for a better life.

An overeducated, disenchanted would-be civil servant fixates on another woman she sees as ideal. Curiosity turns into admiration, which then risks evolving into something much worse.

Breakthroughs Film Festival is Canada’s only film festival devoted exclusively to short films directed by emerging women directors. The festival is back for it’s seventh year on June 15 and 16 in Toronto, and features 19 outstanding short films from 9 different countries spanning across 5 continents. Check out the line up here.

This is Worldtown is giving away two passes to the festival screenings taking place this weekend. 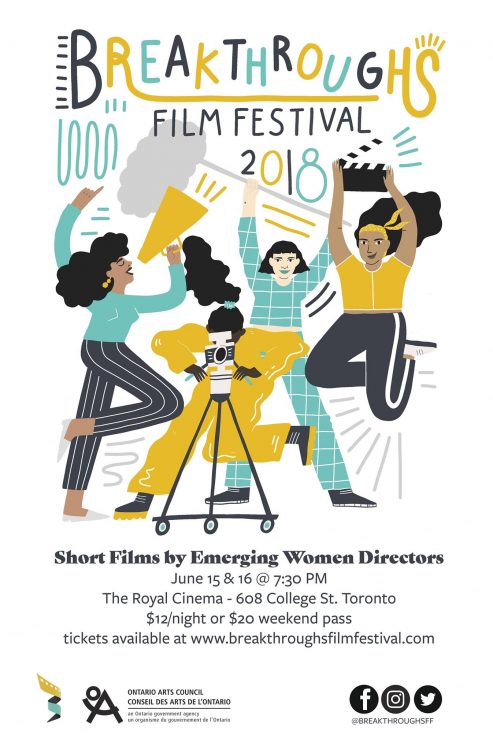 Hot Docs Canadian International Documentary Film Festival (April 26 – May 6) begins this week and it also marks the festival’s 25th anniversary. This year, 50 per cent of the docs at the festival are made by women — achieving gender parity for the first time. Here are some of This is Worldtown’s picks of feature-length docs to watch at this year’s fest. All of these films are directed by women of colour, and many of them are their first features!  These films follow stories of systemic racism, injustice, abuse and corruption – from voices that are often silenced or misheard – to reveal a deeper understanding of survival, resilience, community and healing.

Check out our list of must-watch docs at this year’s #HotDocs25.

THE FEELING OF BEING WATCHED (Dir. Assia Boundaoui)

In the Arab-American neighborhood outside of Chicago where director Assia Boundaoui grew up, most of her neighbors think they have been under surveillance for over a decade. While investigating their experiences, Assia uncovers tens of thousands of pages of FBI documents that prove her hometown was the subject of one of the largest counterterrorism investigations ever conducted in the U.S. before 9/11. With unprecedented access, The Feeling of Being Watched weaves the personal and the political as it follows the filmmaker’s examination of why her community fell under blanket government surveillance. The film sold out all screenings at Tribeca Film Fest to rave reviews. This is a must watch!

As Africa’s top energy producer, Nigeria exports millions of barrels of oil that go on to power industries and vehicles around the world. However, for more than 50% of the country’s population, they have no access to electricity, and those who do often only get a few hours of power a day at best. Take Light looks at the web of Nigeria’s electricity crisis as told through the perspective of a charismatic electrician.

Embodying strength and stoicism, five Venezuelan women from diverse backgrounds each draw a portrait of their country as it suffers under the worst crisis in its history amid extreme food and medicine shortages, a broken justice system, and widespread fear. Featuring stunning visuals and creative soundscapes, Women of the Venezuelan Chaos presents a uniquely beautiful country and people, who remain resilient and resourceful despite the immense challenges they face.

Primas is an evocative portrait of two cousins, Rocío and Aldana, Argentinian teenagers who, in the wake of heinous acts of violence that interrupted their childhoods, are determined to free themselves from the shadows of their past. Traveling in Argentina and Montreal, the girls come of age having revelatory experiences in their everyday lives; learning dance, mime, theatre, circus and visual arts. They express through their bodies what only their imagination, their unique perspective and their unshakable resilience can reveal.

From the 1970s American Indian Movement to 2016 protests at Standing Rock, Warrior Women charts the lifelong activism of Madonna Thunder Hawk, a Lakota woman who, now with her daughter Marcy, continues to fight for Native liberation. Through their story, the film explores what it means to balance a movement with motherhood and how activist legacies are passed down from generation to generation in the face of a government that has continually met native resistance with mass violence.

Blowin’ Up takes us inside the walls of an experimental courtroom in Queens, New York, that attempts to redress the way women arrested for prostitution are shuffled through the criminal justice system. As the film unfolds, we hear directly from these women, in their own words, and begin to understand the complex scenarios that brought them into this space in the first place.

Filmmaker and human rights lawyer Shameela Seedat tracks Thuli Madonsela, South Africa’s first female Public Protector, as she builds her second case against the country’s President, Jacob Zuma, in his unlawful spending of public money. Whispering Truth to Power is a portrait of a remarkable woman in public office, and the cost of keeping justice alive in an increasingly conflicted country.

Iron-willed in the face of cultural and familial pressures, a courageous young Afghan woman forces her father to stand trial for years of sexual abuse—and exposes a sexist justice system and the plight of women at its mercy.