Over the next few months, we will be featuring the projects from our Behind the Dust Visual Series Mediamakers. Have You Eaten? by Soko Fong Negash is the fifth in the series.

A study of the languages of love between Chinese mothers/daughters and the things that may be lost (or gained) in translation.

In Hong Kong Cantonese, “Have you eaten rice yet?” [sihk jó faahn meih a? 食咗飯未呀?] is a common greeting, the equivalent of “how are you?” in English.

It’s a question that can cut through tension or discomfort, no matter how big or small. It is simple, really: food is labour, and labour is love in practice. Any problem can be soothed, theoretically–or at least kept at bay–as bellies are full and fires cooled. A breather, if you will, from whatever hardships befall you.

All else can wait. Sit. Eat.

Have You Eaten? is an ongoing photo and audio series that explores languages of motherly love, pertaining to the relationship between mothers and daughters of Chinese descent. For this project, I connected with eight mother-and-daughter pairs and asked them about what love looks like in their relationships.

In an effort to complicate ideas around the archetype of the tiger mom and the concept that Chinese Mothers Don’t Say I Love You, this is an offer of both the tenderness of physical intimacy and the varying expressions of care.

For some, affection comes easy, bright and unmistakable. And for others, it takes time and a special sort of compromise.

From shoot-to-shoot, home-to-home, I found myself returning to the same place. What does it mean to be loved? How is love expressed and received? What becomes of what is lost in translation?

“I think she loves by making sure that I don’t suffer.”

Karen on her mother:

Theresa on her daughter:

“As opposed to saying ‘I love you’, it’s, ‘eat your vegetables’”

Sihan on her mother:

Tea on her daughter:

“…there was a fresh meal on the table, and I’m like, this woman does not live with me anymore, but she continues to take care of me by nourishing my body.”

Sahar on her mother:

Lin on her daughter:

“She does things that I never would have done in my childhood and I’m really proud of her […] To me, she’s fearless.”

Emma on her mother:

Grace on her daughter:

Soko Fong Negash is a Toronto-born visual artist of Chinese-Eritrean descent. Her creativity is explored primarily through the realms of art, writing, documentary film production, and photography. She is inspired by the underbelly of a place, unspoken (mis)understandings, ancestral knowledge and trauma, and the messy parts of cultural identity. 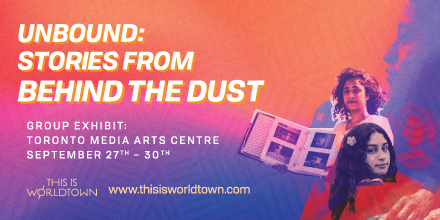 Unbound: Stories from Behind the Dust

In digital spaces and beyond, women of colour are taking charge of creating new representations and documenting personal histories that resonate across diasporic experiences.

On September 27th, This is Worldtown reveals the full work of seven emerging media-makers taking charge in telling new stories about migration, space, healing and love at our group show, Unbound: Stories from Behind the Dust.

The Behind the Dust series is a portal into a world that is curated and created by Women of Colour, showing the possibilities of imagining beyond convention, and “behind the dust” of inflammatory and one-dimensional portrayals of communities under fire. As a collective, the media-makers are Muslim, Indigenous, Black, Women of Colour conveying in-depth visual stories about their communities, celebrating the fullness of experience in all its layers. What does it mean to visiblize these experiences? How are we learning from the past and creating for the future?

Come and celebrate new forms of storytelling, shifting and changing old and tired narratives at Unbound: Stories from Behind the Dust.

Tickets are free and available via Eventbrite.

We are grateful to the Inspirit Foundation and the Olive Tree Foundation for their support of this event.

This event is open to all.