Mariel Brown is an award-winning filmmaker and director of the creative and production companies SAVANT and SAVANT Films. Based in Trinidad and Tobago, Mariel has been working in film and television since 1997. She is committed to uncovering and documenting the Caribbean’s rich history and culture, and is especially interested in exploring the lives of its often-unheralded artists and writers. Mariel is in post-production on the documentary, Unfinished Sentences, a personal exploration of her tumultuous relationship with her late father, writer Wayne Brown. 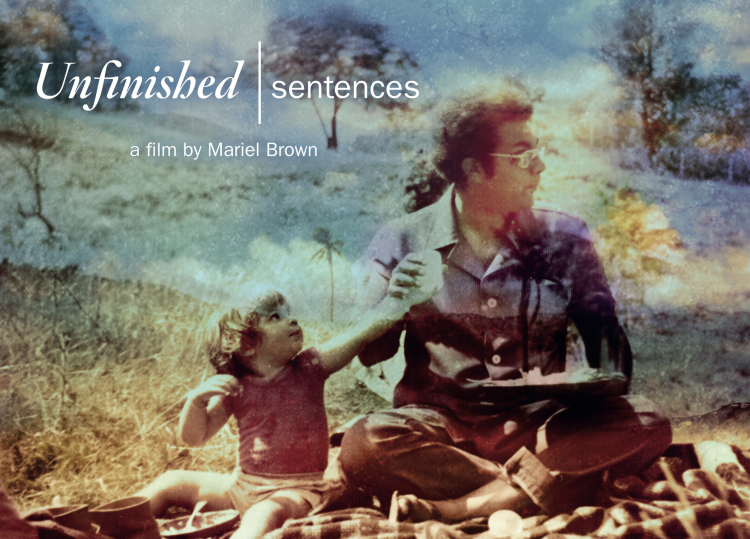 What are some of the things that inspired you to tell the stories that you do?

The Caribbean is very much my inspiration. The people, the lives, the place, the landscape, the history. All of my work has been set in the Caribbean. I see myself as a Caribbean filmmaker and there’s such a dearth of stories coming from the English-speaking Caribbean about our lives and our history. I am driven to tell stories that help us understand ourselves as a people and as a region. To me, the most important thing is to try and be as truthful as possible. Those stories don’t always have to be happy stories. And I feel we desperately need to have these rounded stories that show our humanity and the good and the bad. How do we honour ourselves otherwise?

What pushed you to create Unfinished Sentences?

When I was raising money for the film in Trinidad, one of the reactions I often got was “Oh, but it’s just a film about you and your dad.” All stories are ultimately just a film about somebody and his/her relationship to someone else, or to a moment. I had to point out that there weren’t many stories about a person like my father – a Black, upper-middle class man from Trinidad during the 20th century; when Black, upper-middle class families weren’t very many. To tell a story that had real resonance required that I explore history to some extent. To explore his own family, what context he grew up in looked like. I think Caribbean people are burdened by legacies. We’re burdened by the legacy of slavery and the legacy of colonialism. I think it’s irresponsible to shy away from those things, and it’s also slightly dishonest. We are where we are today because of these things. And they’re not incidental to how we have survived as a society.

In telling my dad’s story, I wanted to be able to look at my grandfather and my grandmother who I never met, and try to unpack why daddy’s relationship with his father was so complicated, and so unlike my own relationship with him. I really wanted to try to understand what it must have felt like to be daddy growing up within his family, the only descendant of all his aunts/uncles, the darkest skinned descendant, the golden child.

Can you talk about your decision to include your personal journey in the film?

Unfinished Sentences started as more of a biographical film. I felt that my father’s contributions as a writer were important and it needed to be documented properly. The story kept pulling me to enter, and I really didn’t want to. I fought against it for years, because I was frightened. The more I delved into writing it, the more I was guided to include myself. There were different questions I found myself needing to answer. I realized the story I wanted to unearth was how our relationship went from something where I absolutely idolized him to when our relationship became incredibly difficult. I started the project in 2010. By 2014, I was allowing myself to think of my own role in the film. It increasingly became the direction the film would take. But it was definitely not how I had envisioned it and also it meant that it was a much more painful process to go through. I couldn’t stand back and be objective. I had to bring the intimacy of our relationship into the story.

When I realized the direction had changed, I very quickly made the decision to hire a script consultant, Fernanda Rossi, because I knew it was too close and I was still very emotional. It was incredibly helpful just to have somebody steer you through the minefield of your own personal life. It’s the first time I ever explored in film such a personal subject, and it’s been an incredibly rewarding process.

Can you describe how you used different visual storytelling methods (re-enactments, family archive photos, natural landscapes) to tell this story?

I had seen Stories We Tell by Sarah Polley while I was working on the film. She was unabashed in her use of reenactment, combining it with her own family’s archive. I just realized as soon as the super 8 footage came on, I was there with her. And I thought, maybe there’s a way I can do the reenactments.  It inspired me and it was helpful because it helped to build the visual landscape of my film. As a documentary filmmaker, I’m not working with actors on a regular basis except to do voiceover and narration. I loved working with the actors, makeup artist and costume designer and going out on location and doing props and sets.

There were two threads to the reenactments. One was the super 8 footage which was meant to look like anyone could have shot it. But then there was the more artful filming of Wayne at the typewriter, which we shot in high definition. I enjoyed working on that because it involved lighting on set and props. But I had a very clear idea that I wanted that to feel properly observed, because this was him engaging in his craft. So while the super 8 footage was intended to feel like a little girl could have had the camera and shot it, I wanted this to look like people who knew what they were doing had done it. I treated it with black and white filters because I wanted it to feel like history but I also wanted it to look really well done. It was a way of honouring the writing process, and the importance of writing in the film.

The third visual thread that really came in was just what I call evocative b-roll. We traveled all over Trinidad at different times of day. This was with another director of photography, Nadia Huggins, a brilliant photographer who has this eye for capturing nature and water in particular in a spectacular way. We did all the underwater stuff together, over quite a long period of time. All of those three threads came together. I am a Cancerian, my father was a Cancerian, so I knew water would be very important. Also because we’re in the Caribbean, we’re on an island, sailing, going to beach, swimming, these were things that were absolutely core to my relationship with my father. My sister and I, that’s how we spent time with him. And also, when I looked at his poetry, so much of it is set in a landscape, the Caribbean landscape of water and sea. So I just made the decision to keep water as a visual thread throughout the film, for all of those reasons.

What’s the core message that you wanted to convey to your audience through this film?

It certainly is about love and family and grief and the staying power of love. I think it’s very important in this film. Especially today, people think, “oh you’ve hurt me, so that’s the end, I will never recover.” Daddy believed that to live is to experience pain, and it doesn’t need to defeat you but you have to live in honour of this. At one point, I was going through a really rough period, and daddy said to me in a letter, “you have to take it day by day, and you earn your passage through this sometimes vale of tears.” I hope that’s what I’m communicating in the film. This idea that life is to be lived and you can’t run away from these things. It’s in the living and engaging and the feeling and the loving that you earn your life.

Can you talk about the importance of reclaiming narratives about the Caribbean?

Our lived experience is what it is. It’s a real life lived experience. But when the first world or global north looks on at the Caribbean, it’s this kind of horrendously flat and inadequate picture of our region. It’s either palm trees and beaches and tourists and suntan lotion or Usain Bolt or it’s crime and violence. There’s so much more. These gaping holes exist, and so we have this kind of schizophrenia in ourselves because so little audio/visual media is actually created in the Caribbean. The view of ourselves that is constantly being presented to traditional television and cinema, is one in which your life is completely denied. The reality of your life is completely denied, and non-existent. Nuanced stories don’t exactly come with five word taglines. Going back to this idea of why I do what I do, it’s because I want to tell a more varied and layered story of the Caribbean experience. It just does not exist in the way that it should. And within that, we have no choice but to deal with the thorny issues – slavery and colonialism. We must; I feel there is a responsibility to do that.

Our mandate is to foster and encourage intercultural understanding and citizen participation through the creation and distribution of educational films, videos, theatre as well as new media programs, products and resource materials that reflect the diversity and creativity of Caribbean-Canadian heritage culture.

CineFAM is a Haitian-Creole word meaning ‘films by women’. CTFF is a proud supporter of women of colour creators, highlighting films by international female filmmakers each year.

Co-presented by WIFT-T, Film Fatales, Women in View & This is Worldtown.