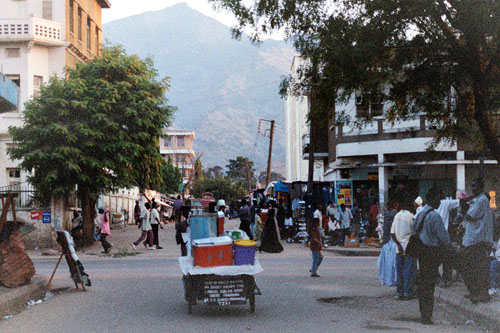 The last time I was here, I didn’t have luxuries like fresh cheese. Wait – I was actually never in Morogoro or Tanzania before this trip, and yes – access to cheese is a reasonable luxury when you don’t expect it. So many of the emails I’ve written since arriving 8 weeks ago have started with “the last time I was here…”. I’ve had to hold myself back from using the familiarity lens to portray this experience – having my old travel memories inflect themselves into my daily life in Morogoro. In one way, familiarity helps jump start the adaptation process, and when you’re fortunate to have had other experiences to compare this to, it can also make for a great point of connecting with your new home.

I made a few promises before coming here. One of them was that I would not let the time I’d spent in Gourcy, Burkina Faso five years ago overshadow my time here – that I would not get caught in comparing this to that, or noting how things are different here to there. But promises are not always easy to keep, and I am guilty of making this connection too many times. When I wrote to a friend who’s had similar travel déjà vu, she responded: “It’s only natural, you come to a place, you assimilate, and then you leave – taking a part of it with you.” Her words made me a little sad – I do tend to create strong lasting connections with the places I’ve visited, but I can’t help how much I take with me compared to what I leave  behind.

My life in Morogoro is markedly different from the one I lived in Gourcy. Although Morogoro’s chaotic backstreets, extended greetings and tea ceremonies take on a familiar tone,  I can safely attest that East Africa is not, never was (other than perhaps, some far corner of my imagination) West Africa (just in case you ever made that wrong assumption). Morogoro, is much bigger in comparison to Gourcy and it is set at the foot of the spectacular and lush Uluguru mountains. It also comes with all the quirks of small towns (soon, nobody’s a stranger and there are only a handful of town “hotspots” to hit on the weekend), but it is not without its own distinctions.

I’ve noticed the sizable number of shops owned and run by South Asians. Bollywood beats blasting across from Swahili rhythms. One of the most prominent buildings in Morogoro centre is the Ismaili mosque – an old structure from the 1930’s – forming a central part of the Indian, and even Middle Eastern influence that have touched the town. Although Morogoro was too inland to be grazed by the Arabian traders who made their way along the coast of Tanzania, the Kahawa (coffee houses), Swahili language and food all carry reminders of that past. And of course the unmistakeable roundabouts that remind me of the colonial planning of British-controlled India and Pakistan – trying so hard to find a flow among disorder. Then there are the Greeks who’ve been here two generations or longer, the Italians, the Chinese and the ever-increasing number of Wazungus du jour (Europeans and their descendants) – a new breed of foreigner that trapezes through for weeks, months or years at a time. Only to pack up and drive off in their 4×4 to the next landmark “project”

Of course that’s a bit of a generalization, but the notable number of NGOs, development and business projects that Tanzania hosts means inevitably you find the ubiquitous expat-local divide. There’s an unspoken rule that where expats cluster,their hangouts emerge and the locals always knowingly smirk at the fact that soon, you too, will form a part of this ring.  At least in Morogoro, unlike many consumption-heavy East African urban centres, you can still manage to escape the shiny supermarkets and the gated communities. But sadly, here too, I see the fencing in of expat life from local eyes.  Tanzania, known for its peacefulness, lack of dominating ethnic rivalries and stunning natural beauty can only so much be a playground for foreign development types. I fit that bill by all definitions, but I’m still wary of the assumptions I build being here, and fighting the labels and associations that come with being an outsider trying to work and live in another country. And also, in how much I keep comparing this to then.

Then, as now, I was working on a Gender, Health and Human Rights Project based at a community organisation. Then, as now, I wasn’t able to speak the first language of the project participants. Then, as now, my preferred mode of transport was on two wheels (bikes and motos). Then, as now, I still didn’t have an affinity for cooked millet at mealtimes. And then as now, I was scared that my preconceived ideas about “African life” would interrupt what I actually saw. The guilt of viewing “Africa” through a set of clichés starts to set in  – perhaps this is why everything is so familiar and so compartmentalized in my memory at the same time.  And then I begin to fear I’m perhaps reducing “Africa” to the very lens that writers and commentators like Binyavanga Wanaina or Laura Seay warn of. Or maybe I’m still trying to place myself.

SANA A. MALIK is the founder and editor of This is Worldtown. While she frequently critiques the aid industry and lambasts the misrepresentation of the developing world, she’s joined the ranks of many a “field” worker trying to figure it all out for herself. She sends this dispatch from Morogoro, Tanzania.