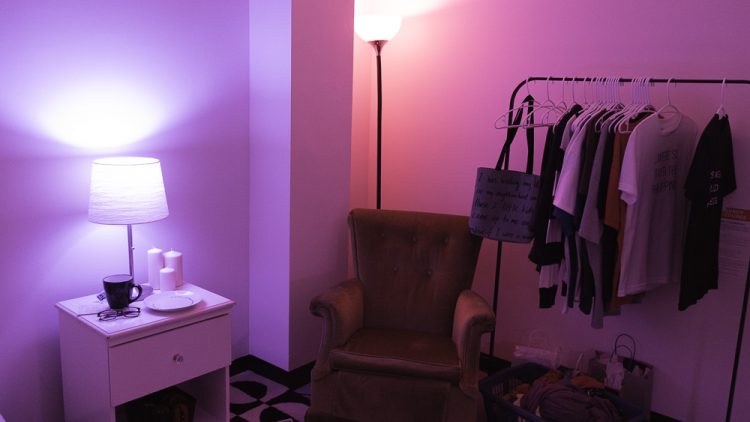 In May of 2017, I exhibited my thesis work, “Living in the Third Space” at OCAD University’s 102nd Graduate Exhibition. As my installation loops through its audio and lighting sequence, it draws viewers into the room like flies to UV lamps. Viewers find themselves suddenly immersed in a staged bedroom where clips play from interviews of Asian identifying individuals sharing stories of racially charged experiences. 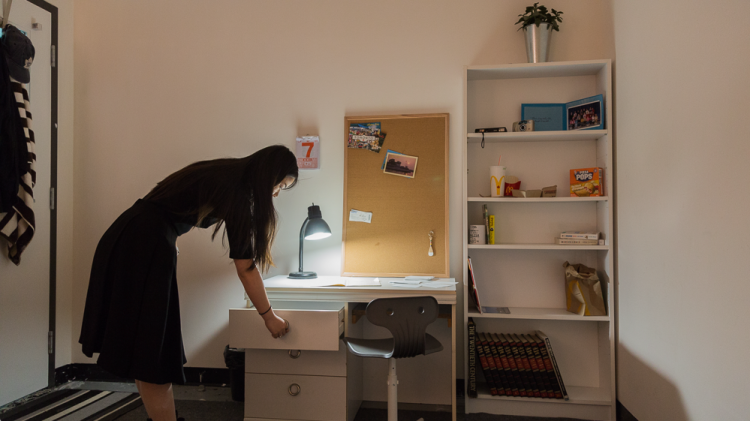 “Living in the Third Space” is a media installation that narrates the state of being in-between cultural identities experienced by Asian-Canadians. Titled after the theory of third space (a concept of claiming a third position in terms of negotiating one’s conflicted identity) the installation is a literal interpretation of this theory, reflected in a bedroom setting. 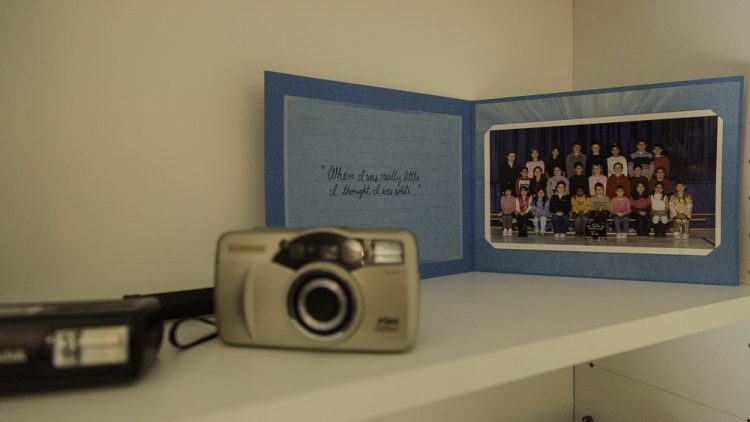 The idea was inspired by my experiences growing up as a second-generation Canadian of Chinese and Vietnamese descent. At home, my parents had passed down certain practices and traditions particular to the cultures they grew up in. Outside of home, especially in school communities, societal culture is framed predominantly around Western Canadian ideals and values which do not always include people of colour. Despite growing up in Canada – I couldn’t identify completely with Western Canadian traditions. nor with the cultural traditions passed down through family members, instead, the idea of a hyphenated Canadian culture best fit my experiences. Thus, this inbetweenness of cultural identity became the focal point of my thesis work. 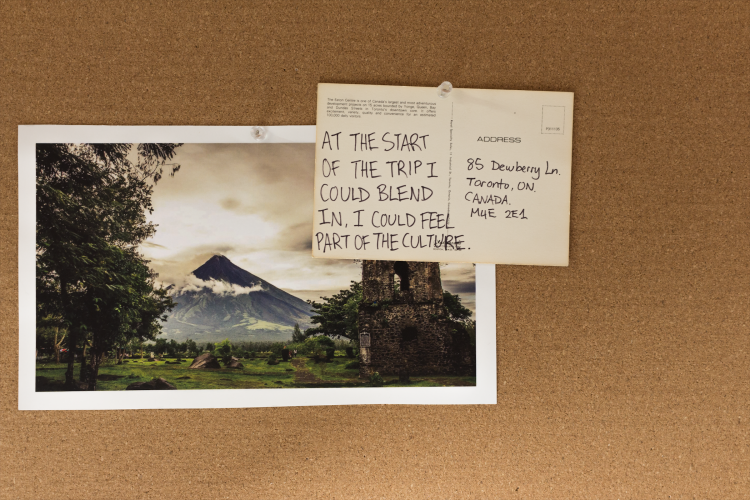 I decided the best way to approach a discussion of the hyphenated Canadian identity was to explore my own experiences, in a way that others may relate. I interviewed other Asian-Canadians that shared similar feelings of inbetweenness in cultural or ethnic identity. From these interviews, I drew out anecdotes that alluded to the un-obvious, vague, or indefinite experiences of race and culture. 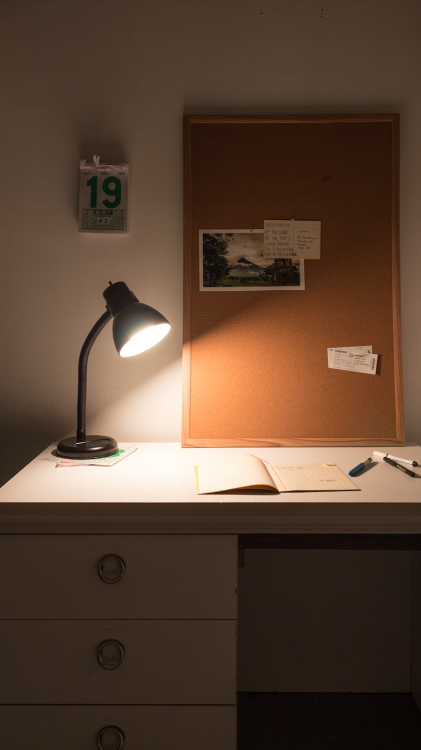 Through my research, I had learned about the sociolinguistic theory of the third space, described by English scholar and critical theorist, Homi K. Bhabha. This  ambiguous area that forms when two or more cultures interact, explains the uniqueness of an individual’s identity. From this theory, I had taken the metaphorical third space to create a literal space that examined the multiple cultures many individuals living in Canada identify with. The bedroom became the appropriate setting for intimate narratives to be shared. 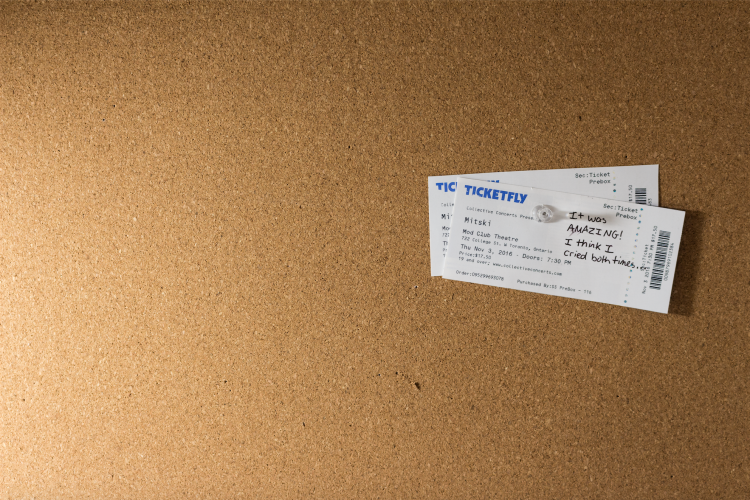 The staged bedroom is dressed with furniture items such as a bed, chair, and a desk, as well as donated artifacts of memorabilia, clothing, postcards, and books that allude to the respective stories shared by participating interviewees. Five different audio pieces play from hidden locations in the space while timed lighting effects change to suit the tone with each respective interview segment. Visual clues and anecdotes from each individuals’ stories are covertly integrated into the objects, yet are very present in the interactive space. The traveling voices and lighting act as guided reading throughout the immersive room of each narrator’s experience. 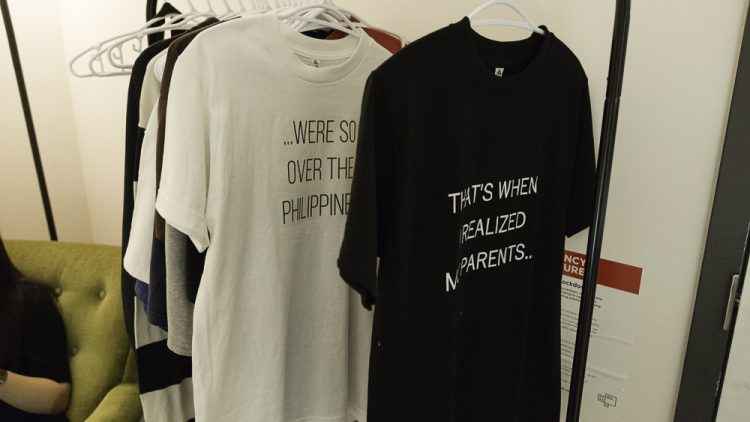 The bedroom as a stage and the objects like performers, anecdotes from the interviews that allude to experiences of being in-between identities, or acts of discrimination were extracted as appropriate quotes to tell these stories. These quotes  were inscribed onto items that could represent or symbolize each story, transforming the room into an analogy of how microaggressions are present in everyday life. The inscriptions were meant to blend in and be unsuspecting until the viewer reads them and is confronted. 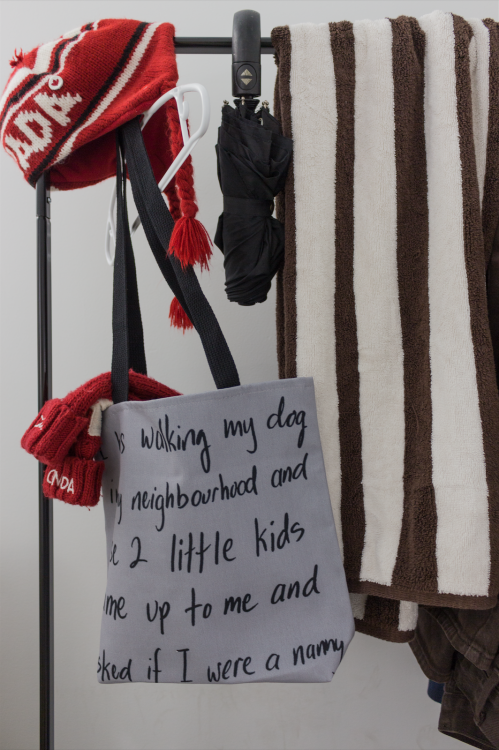 Such as the tote bag hanging on the clothing rack, the quote reading, “I was walking my dog in my neighbourhood and these 2 little kids came up to me and asked if I were a nanny.” Although appearing to be an ordinary bag, the inscription actually  reads as an account from an uncomfortable personal experience of negative stereotyping this particular individual received. 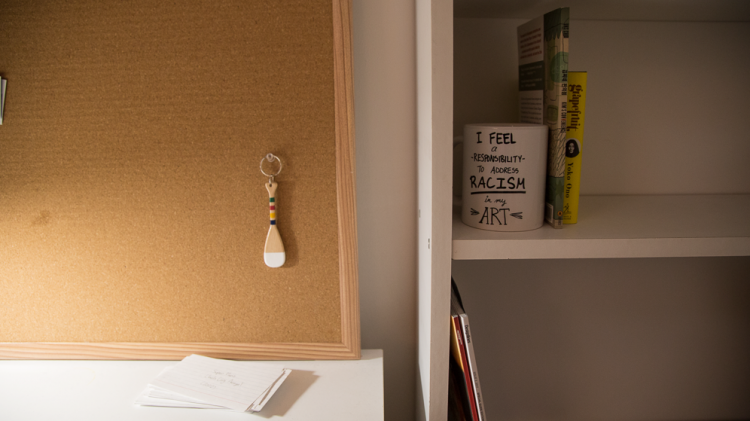 Some of the anecdotes followed audio segments from the interviews, cued by orchestrated lighting and accompanied by diegetic sound effects like drawers opening, pages flipping, and handwriting. A new scene is set creating a tone appropriate for each narrative. Through setting up a story to be shared in this manner, audience members are immersed in the environment, making the experience of the stories more provocative. With the quote on the mug sitting on the bookcase for instance, all the lights turned off while the desk lamp was left on and changed to a cooler colour. Sound effects of pen scribbling played from a speaker near the desk and the sound of a spoon stirring in a cup played from the bookcase, while the interview respective to the quote on the mug played. From seeing the quote, “I feel a responsibility to address racism in my art.” on the mug to experiencing the story, the audience is gradually pulled into an immersive setting making a strong impression on visitors of the issues and particularities of the Asian-Canadian experience. 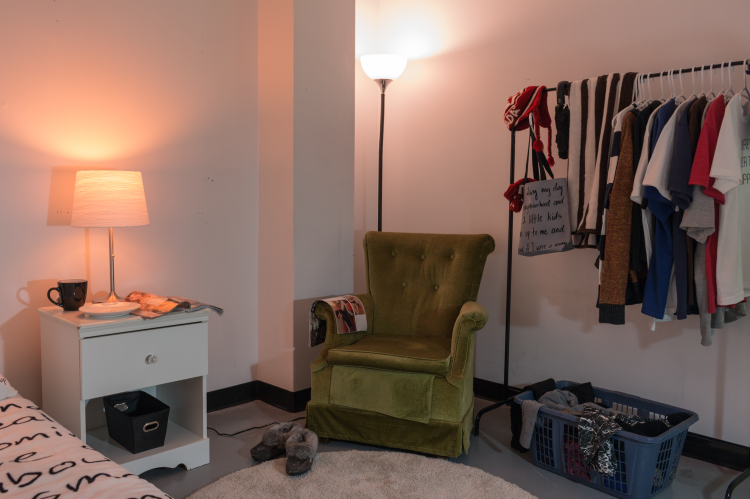 As Grad Ex ends, the halls of the art school are stripped bare of students’ thesis projects. It was like a sad goodbye at the end of a great party. After the show, I had resumed working my part time jobs on the weekends. From the excitement of showing ambitious art work concerned with issues on racism, to the quiet little family owned restaurant of a predominantly white town. I felt stuck again in the same surroundings I had been fighting in my art practice, feeling slightly defeated, as if my work was for nothing.

I dwell on the quote that is on the mug, feeling resonance to this responsibility of making work on race as a woman of colour. The bane of my racialized experiences have galvanized my feelings to commit to defending a minority voice, but can be emotionally exhausting. Recognizing this, I began allowing myself more liberty to broaden my artistic practice with various themes, interests, and enjoyments that do not necessarily pertain to social issues, as I learned that rest, self-care, and celebration as people of colour can be a radical and important form of activism as well.

This stagnant feeling I am experiencing is yet only another state of being in-between, however it is the in-betweenness of being an artist of colour and the choices I decide to make for my practice looking into the future.

Janet Tran is an emerging Toronto based artist creating relational works that examine social issues within multiculturalism, racism, feminist issues, mental health, and cultural identity in the Canadian context. Her works usually call the audience into participation or interaction. Tran identifies as a Canadian of Chinese and Vietnamese descent. Born and raised in Toronto, she majored in Integrated Media at Ontario’s College of Art and Design University, receiving her Bachelors of Fine Arts in 2017.