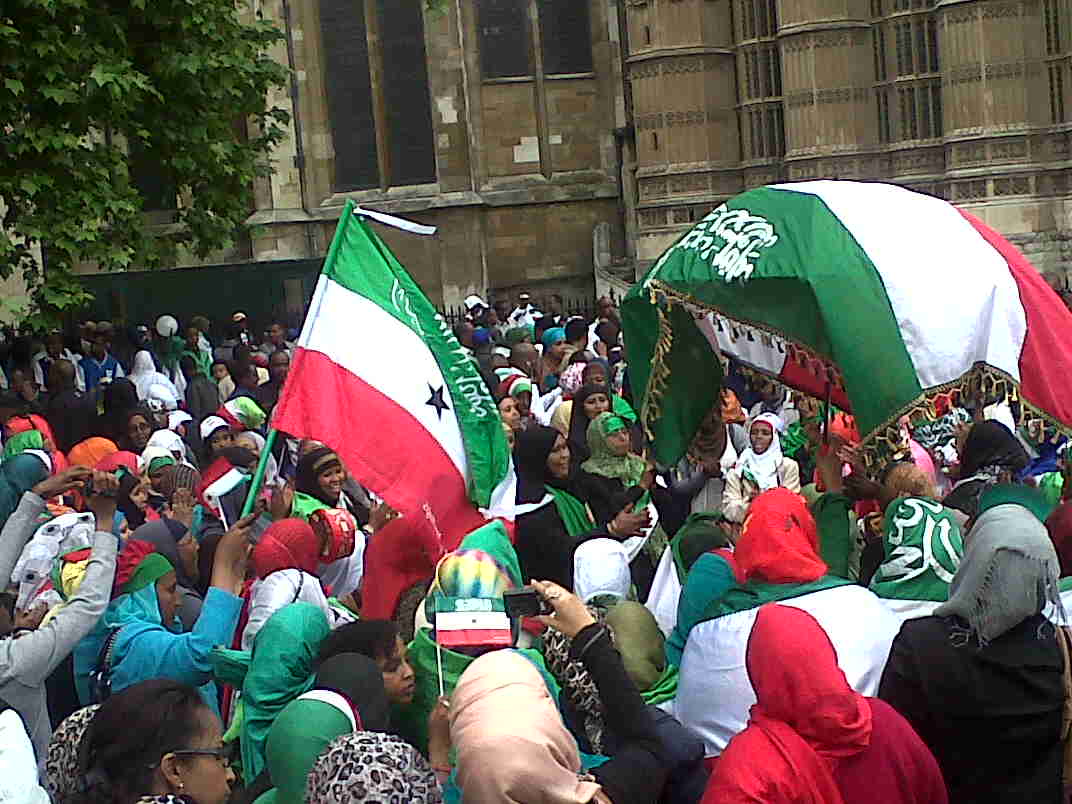 Without knowing the end of my dreams
They float to you
Would you deny me the chance to hope?
Or the will to want better for myself
My hope for you is to inspire others
For you to pursue your dreams too
For Peace

Somaliland – a self-declared Republic – celebrated its 20th anniversary on May 18 2011.  Somalilanders and supporters took to cities in London, Amsterdam, Toronto and many others with jubilation at its achievements. Somaliland has sustained peace and democracy amidst conflicts in the surrounding region.  This has less to do with the effectiveness of government institutions than with people power. That same force that has carried several Arab countries to regime-change and a new sense of self-awareness came to fruition for Somalilanders in 1991. Celebrations at a recent rally held in London on May 18th echoed the somber reflection of a generation who fled the conflict in the early 1990s mixed with a generation of youth who grew up with an imagination of a nation that some have yet to see but is nonetheless real in their minds.

The Somaliland Diaspora continues to contribute significantly to Somaliland through remittances that go towards livelihoods for families and friends. Most recently, fundraising was arduously undertaken among supporters of competing political parties for the June 2010 presidential elections. However, the most significant contribution from the Somaliland Diaspora is the nurturing of a sense of nationhood. With the absence of formal statehood for Somaliland, the imagination of a state might be easily lost-and yet, hope reigns. It is true that recognition is important for the majority of Somalilanders in the Diaspora. What is forgotten is that without the will and determination to build communities or a sense of belonging, recognition and its benefits are merely peripheral to the cause. Instead, the heart of the matter is precisely that-cultivating a place and home for a people too often characterized as stateless, fragile, mired in chaos and incapable of coming together for the greater good. The will of the people in Somaliland and its Diaspora is to live, build, repair, and thrive in the face of continuing hardships.

The significance of Somaliland’s 20th anniversary is captured in the minds of many who experienced the conflict in the early 1990s firsthand and the pursuit of sustainable peace thereafter. Many Somalilanders who attended the May 18th rally in London expressed a desire to identify themselves as a people capable of inspiring one another to hope for peace and to live to see Somaliland recognized as a state. They also expressed a difference between ‘home’ and ‘belonging.’ Somalilanders have thrived in Western countries and contribute to their societies as active citizens building communities and permanent homes for their families. Belonging was expressed as the ‘idea’ of home. Their minds firmly entrenched in London but Somaliland capturing their hearts. That idea has endured despite the lack of recognition afforded the Somaliland state.

Those in Somaliland and in the Diaspora will continue to champion the cause towards recognition. Somalilanders will work to hold fast to their ideals, and their aspirations; as a people defined by their persistent optimism, forever passionate about their identity and forever hopeful of the future for Somaliland. Hope reigns.

—–
SIHAM RAYALE is a PhD Candidate at the School of Oriental and African Studies with a focus on gender, conflict, peacebuilding and post-conflict reconstruction. Her current research focuses on Somaliland’s Peacebuilding efforts and women’s political participation.